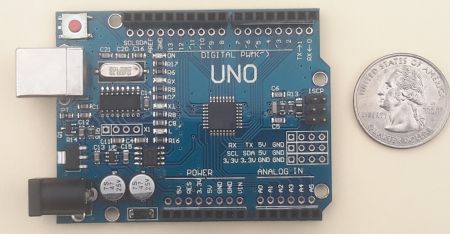 The Arduino is a series of open design (not patented) micro-controllers.  The Arduino UNO model shown above costs $10 to 20.  Micro-controllers have limited function compared to micro-computers and are widely used for the control of input and output devices.  Because of the open design of the Arduino, they are manufactured around the world and are available in many models that differ in size, processing speed, memory, and cost.

First introduced in 2005, it has developed into a inexpensive and easy platform for novices and professionals to build controllers for sensors and actuators.  An Arduino is usually programmed in the Python language scripts that are loaded from program development tools that run on PCs or MACs.  The basic Arduino does not come with built-in networking.  Networking modules called shields are normally stacked on top of the Arduino.

There is a very active worldwide community of Arduino users.  Start your search at the Arduino Foundation.

Copyright ©2021 by Sun City Texas Community Association. All Rights Reserved.  sites by MembersFirst  |  Terms of Use  |  Privacy  |  Request My Information