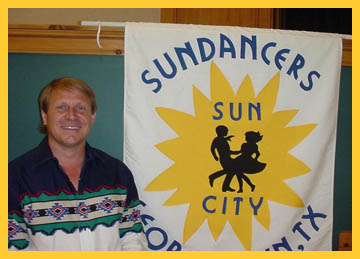 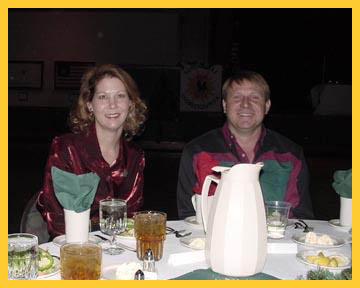 Brad Caldwell has been a caller since 1988 and has been our caller since the Sundancers were organized in 1997. The Sundancers have grown from the first Mainstream beginner’s class to over 140 members in 2008 with a great deal of credit going to Brad. He is very patient with the new dancers and has a smooth technique of guiding you through the square dance step. He also has a beautiful singing voice and can do impersonations of Elvis Presley, Ray Charles, and many more. In 1998 the club added Plus classes. Brad is a national caller and has called square dancing throughout the country. Brad was born and raised in Texas and prefers to live and work here in his home state. For that we are thankful.

When Brad was a young boy, his parents would take him to square dancing. After the second dance Brad knew he wanted to become a caller. He has been calling dances for over 25 years, and by his enthusiasm you know he enjoys it very much.

Brad married Paula in 1999 and moved to Georgetown with Michael, Andrew, and Randy.Maybe in the future we will have one of the boy’s calling for us. Paula is shown with Brad at our Christmas party.

Copyright ©2021 by Sun City Texas Community Association. All Rights Reserved.  sites by MembersFirst  |  Terms of Use  |  Privacy  |  Request My Information